Home>News of Electrical System > The seven types of power, problems that they can make and how to overcome them

The seven types of power, problems that they can make and how to overcome them

According to Joseph Seymour, being able to talk effectively about power, such as knowing the difference between an interruption, and an oscillatory transient, could make a huge difference when making purchase decisions for power correction devices.

The analysis was done by Joseph and explains what are the reasons or causes of problems.

He suggests that communication mistake can have expensive consequences when the wrong power correction device is purchased for your needs, which includes downtime, lost wages, or even equipment damage.There are seven power quality disturbances going to be described.Here is the ist of seven categories based on wave shape:

Potentially the most damaging type of power disturbance, transients fall into two subcategories impulsive and oscillatory.

Impulsive transients are sudden high peak events that raise the voltage and/or current levels in either a positive or a negative direction. These types of events can be categorized further by the speed at which they occur (fast, medium, and slow). The impulsive transient is what most people are referring to when they say they have experienced a surge or a spike.

Many different terms, such as bump, glitch, power surge, and spike have been used to describe impulsive transients. However, an oscillatory transient is a sudden change in the steady-state condition of a signal's voltage, current, or both, at both the positive and negative signal limits, oscillating at the natural system frequency.

In simple terms, the transient causes the power signal to alternately swell and then shrink, very rapidly. Oscillatory transients usually decay to zero within a cycle (a decaying oscillation). These transients occur when you turn off an inductive or capacitive load, such as a motor or capacitor bank. 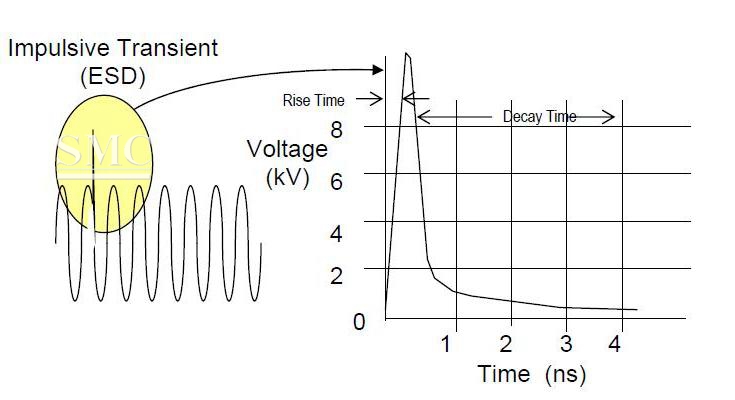 Two of the most viable protection methods when it comes to impulsive transients pertain to the elimination of potential ESD, and the use of surge suppression devices. 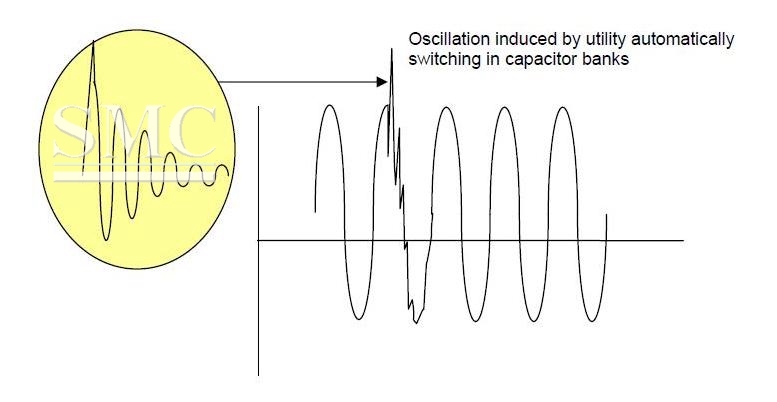 A common solution to capacitor tripping is the installation of line reactors or chokes that dampen the oscillatory transient to a manageable level. These reactors can be installed ahead of the drive or on the dc link and are available as a standard feature or as an option onmost ASDs.

An interruption is defined as the complete loss of supply voltage or load current. Depending on its duration, an interruption is categorized as instantaneous, momentary, temporary, or sustained.

The causes of interruptions can vary, but are usually the result of some type of electrical supply grid damage, such as lightning strikes, animals, trees, vehicle accidents, destructive weather (high winds, heavy snow or ice on lines, etc.), equipment failure, or a basic circuit breaker tripping. While the utility infrastructure is designed to automatically compensate for many of these problems, it is not infallible. One of the more common examples of what can cause an interruption in commercial power systems are utility protective devices, such as automatic circuit reclosers.

Once the potential for problems is reduced, additional equipment or design methods are needed to allow the customer's equipment or process to ride-through (remain at constant operation during power quality disturbances), or to restart after (and during) unavoidable interruptions. The most common mitigating devices employed are the uninterruptible power supply (UPS), motor generator, and the use of system design techniques that take advantage of redundant systems and energy storage.

Sag is a reduction of AC voltage at a given frequency for the duration of 0.5 cycles to 1 minute’s time. Sags are usually caused by system faults, and are also often the result of switching on loads with heavy startup currents. Common causes of sags include starting large loads (such as one might see when they first start up a large air conditioning unit) and remote fault clearing performed by utility equipment. Similarly, the starting of large motors inside an industrial facility can result in significant voltage drop (sag).

While it may be the most effective solution, adding a dedicated circuit for large startup loads may not always be practical or economical, especially if a whole facility has a myriad of large startup loads. Other solutions to large starting loads include alternative power starting sources that do not load the rest of the electrical infrastructure at motor startup such as, reduced-voltage starters, with either autotransformers, or star-delta configurations.

Under voltages are the results of long-term problems that create sags. The term “brownout” has been commonly used to describe this problem, and has been superseded by the term under voltage. Brownout is ambiguous in that it also refers to commercial power delivery strategy during periods of extended high demand.

Under voltages can create overheating in motors, and can lead to the failure of non-linear loads such as computer power supplies.

The solution for sags also applies to under voltages. However, a UPS with the ability to adjust voltage using an inverter first before using battery power will prevent the need to replace UPS batteries as often. More importantly, if an under voltage remains constant, it may be a sign of a serious equipment fault, configuration problem, or that the utility supply needs to be addressed.

A swell is the reverse form of sag, having an increase in AC voltage for duration of 0.5 cycles to 1 minute’s time. For swells, high-impedance neutral connections, sudden (especially large) load reductions, and a single-phase fault on a three-phase system are common sources.

Overvoltages  can be the result of long-term problems that create swells. An overvoltage can be thought of as an extended swell. Overvoltages are also common in areas where supply transformer tap settings are set incorrectly and loads have been reduced.

This is common in seasonal regions where communities reduce in power usage during off-season and the output set for the high usage part of the season is still being supplied even though the power need is much smaller.

There are five primary types of waveform distortion:

DC offset - direct current can be induced into an AC distribution system, often due to failure of rectifiers within the many AC to DC conversion technologies that have proliferated modern equipment.

DC can traverse the ac power system and add unwanted current to devices already operating at their rated level. Overheating and saturation of transformers can be the result.

Symptoms of harmonic problems include overheated transformers, neutral conductors, and other electrical distribution equipment, as well as the tripping of circuit breakers and loss of synchronization on timing circuits that are dependent upon a clean sine wave trigger at the zero crossover point.

Interharmonics - interharmonics are a type of waveform distortion that are usually the result of a signal imposed on the supply voltage by electrical equipment such as static frequency converters, induction motors and arcing devices.

Solutions to interharmonics include filters, UPS systems, and line conditioners.

Cycloconverters (which control large linear motors used in rolling mill, cement, and mining equipment), create some of the most significant interharmonic supply power problems. These devices transform the supply voltage into an AC voltage of a frequency lower or higher than that of the supply frequency.

Notching - is a periodic voltage disturbance caused by electronic devices, such as variable speed drives, light dimmers and arc welders under normal operation.

This problem could be described as a transient impulse problem, but because the notches are periodic over each ½ cycle, notching is considered a waveform distortion problem. The usual consequences of notching are system halts, data loss, and data transmission problems.

Noise - is unwanted voltage or current superimposed on the power system voltage or current waveform. Noise can be generated by power electronic devices, control circuits, arc welders, switching power supplies, radio transmitters and so on.

The solution to this particular problem involves moving data carrying devices and/or cabling away from the source of EMI/RFI, or to provide additional shielding for the data devices and/or their cabling to reduce, or nullify, the effects of the EMI/RFI.

Arc furnaces are the most common cause of voltage fluctuation on the transmission and distribution system.

One symptom of this problem is flickering of incandescent lamps.Removing the offending load, relocating the sensitive equipment, or installing power line conditioning or UPS devices, are methods to resolve this problem.

Removing the offending load, relocating the sensitive equipment, or installing power line conditioning or UPS devices, are methods to resolve this problem.

Frequency variations- it is extremely rare in stable utility power systems, especially systems interconnected via a power grid. Where sites have dedicated standby generators or poor power infrastructure, frequency variation is more common especially if the generator is heavily loaded.

IT equipment is frequency tolerant, and generally not affected by minor shifts in local generator frequency.

What would be affected would be any motor device or sensitive device that relies on steady regular cycling of power over time. Frequency variations may cause a motor to run faster or slower to match the frequency of the input power.

To correct this problem, all generated power sources and other power sources causing the frequency variation should be assessed, then repaired, corrected, or replaced.