Unitized curtain walls and their limitations

Unitized curtain walls have become the preferred method for enclosing buildings, as more building owners, architects and contractors see the benefits of this type of construction. Unitized systems allow buildings to be enclosed quickly, which can help to speed up the construction process leading to earlier occupation. The fabrication process for unitized systems is more consistent than for stick-built curtain walls, as unitized wall systems are constructed in almost an assembly line fashion, indoors, and under controlled environmental conditions.

However, as with any type of construction product, the more the systems are used, the more we begin to understand their limitations. This article addresses three common limitations and problems that are encountered with the use of unitized curtain walls, along with considerations for addressing such problems. Since unitized curtain walls are the current state-of-the-art in curtain wall technology, designers, consultants and contractors alike need to become familiar with these systems’ technical limitations, so that we can develop effective designs that address their use for all areas of the building enclosure. 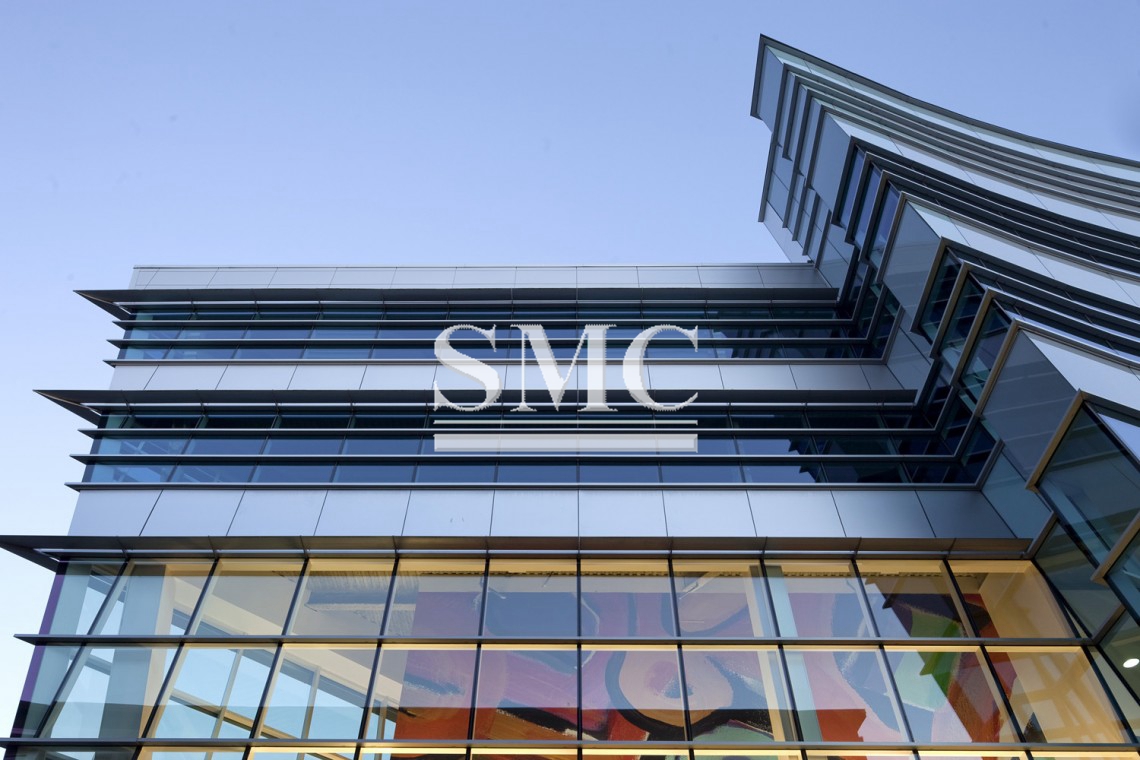 Curtain wall manufacturers have reliably dealt with the issue of panel-to-panel alignment by developing structural alignment clips that can be slid across the interlocking heads of adjoining panels to maintain horizontal alignment and by refining the designs of their lifting lugs that help to hold the vertical alignment between panels at their stack conditions. The alignment challenges that manufacturers now face are the unique project-specific building features that interfere with typical panel alignments and must be dealt with on a project-by-project basis. 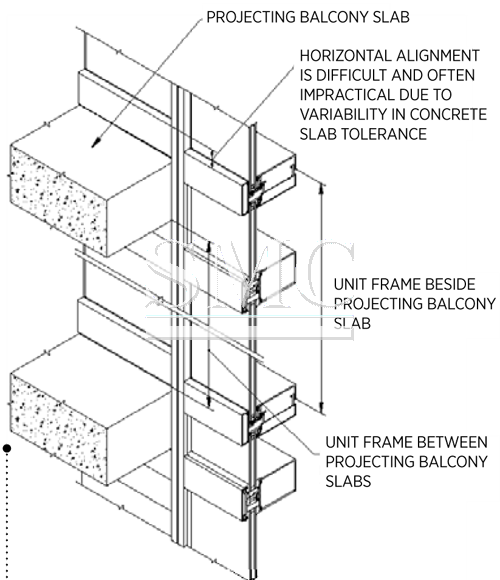 Contractors are also challenged by the fact that floor slabs tend to deflect between support conditions.

A solution to this problem should never be to modify unitized frames in the field, or to cut away portions of the concrete slab or other structural element in order to accommodate structural misalignments and normal building deflections. The solution is to design around these inevitable conditions rather than react to a problem after it occurs.

The most practical and cost effective means for dealing with varying structural conditions is to incorporate a “leave out” panel above the unitized wall that can be custom measured and fabricated after the curtain wall is installed in the building.

A second means for addressing curtain wall-to-structure alignment conditions is to develop a design utilizing a deep receptor frame, possibly with a bite range of 2 to 3 inches to accommodate large tolerance variations in structural interference. This is the least reliable method for dealing with misalignment issues, as it cannot accommodate every conceivable misalignment situation and can begin to get bulky and unwieldy in appearance.

Once the perimeter seals and corner seals between the end dam and frame above are installed, the ability of the system to accommodate differential movement is hampered, as the two modular units become locked together with sealant. Differential movement between two stacked units will not be resisted by the end dam seals, and the likely result will be failure of the perimeter seal or failure of the end dam seal, each of which may result in air and/or water infiltration into the building. 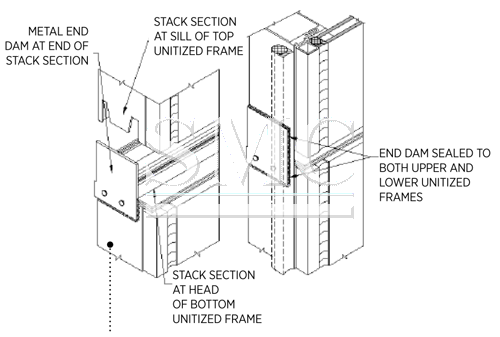 Thermal bridging at the stack head

Most manufacturers’ stacking designs do not incorporate thermal breaks, even though other horizontal and vertical members within the unitized wall frame may be thermally broken. This causes the frame to be cooled through the depth of the stack section, which increases the potential for condensation to form on the inboard side of the frame which in turn can stain or damage interior finishes.

Stack sections are not typically thermally broken because the stack head must be able to resist rotation from positive and negative wind loads, and be able to transfer sometimes large loads through the stack to the unitized frame below. Since thermal breaks are composed of either plastic or vinyl composites, they have lower strength capacity than solid aluminum framing and cannot always be relied upon to transmit structural loads between unit frames. 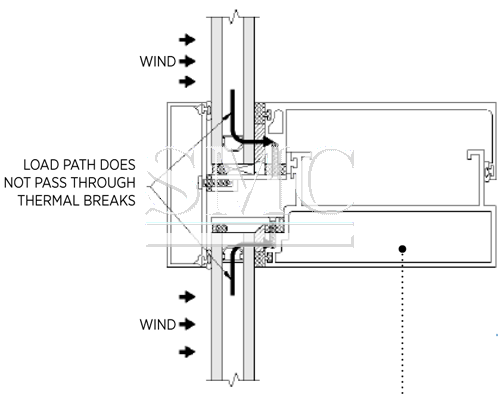