Home>News of Metal Industry > Magnesium and its unique usage

Magnesium and its unique usage

Magnesium oxide, more commonly called magnesia, is a versatile mineral that when used as part of a cement mixture and cast into thin cement panels under proper curing procedures and practices can be used in residential and commercial building construction. Some versions are suitable for a wide range of general building uses and for applications that require fire resistance, mold and mildew control, as well as sound control applications and many other benefits. As an environmentally friendly building material, magnesia board has strength and resistance due to very strong bonds between magnesium and oxygen atoms that form the magnesium oxide molecules (chemical symbol MgO).

Magnesia boards are used in place of traditional gypsum drywall as wall and ceiling covering material and sheathing. It is also used in a number of other construction applications such as fascias, soffit, shaft-liner and area separation, wall sheathing, and as tile backing (backer board) or as substrates for coatings and insulated systems such as finish systems, EIFS, and some types of stucco. 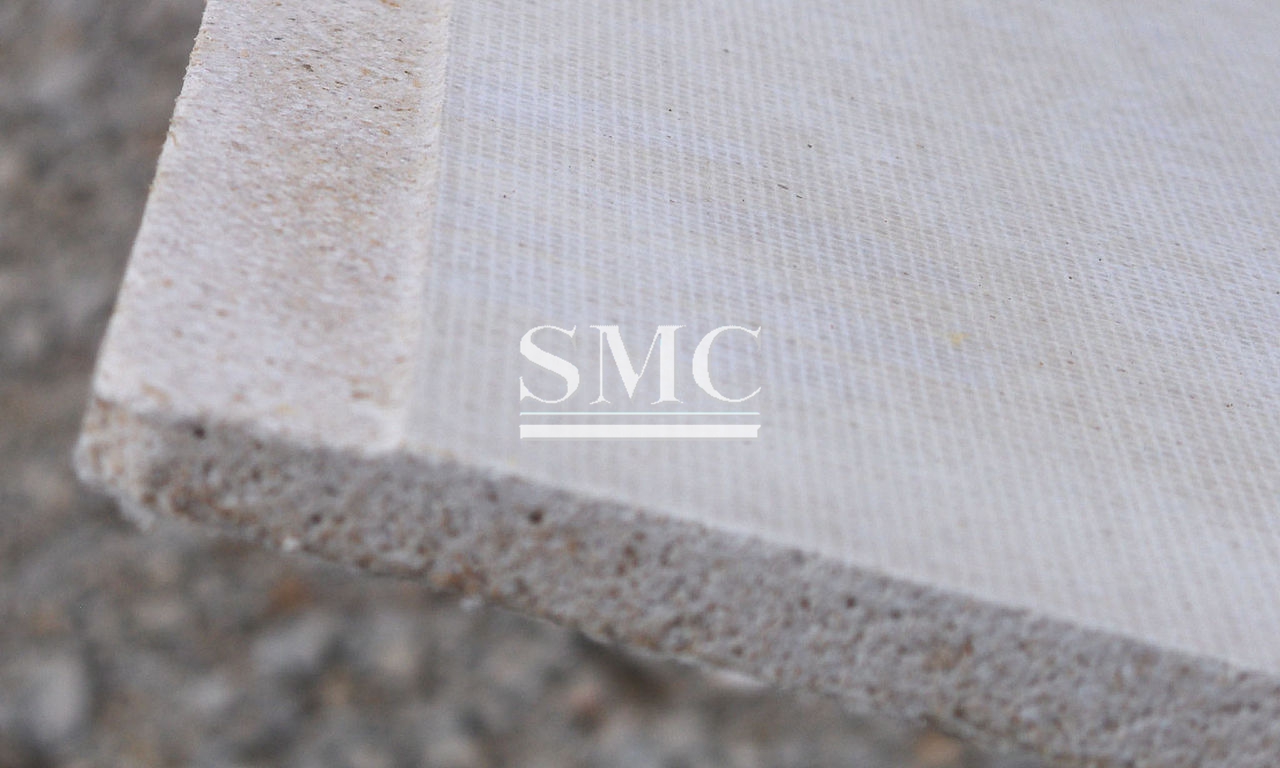 Magnesia cement board for building construction is available in various sizes and thickness. It is not a paper faced material. It generally comes in a light gray, white or beige color. Numerous versions and value of grades exist including smooth face, rough texture, utility, versatile grades as well as different densities and strengths for different applications and uses.

Presently various magnesia cement boards are widely used in Asia as a primary construction material. Some versions have been designated as the ‘official’ construction specified material of the 2008 Summer Olympic Games and some versions are used extensively on the inside and outside of all the walls, fireproofing beams, and as the sub-floor sheathing in one of the world’s tallest buildings, Taipei 101, located in Taipei, Taiwan.

Magnesia cement is manufactured in a number of areas around the world, primarily near areas where magnesia based ore (periclase) deposits are mined. Major deposits are found in China, Europe, and Canada. Magnesia ore deposits in the US are negligible. Estimates put the use of magnesia board products at around 8 million SQF in Asia alone. It is gaining popularity in the US, particularly near coastal regions.

Magnesia bond employments Previously, amazonite development may be ancien administration. It might have been utilized essential concerning illustration a mortality table part Also stabilizer for soil blocks. Magnesia need also been identified in the great divider about china Also different antiquated landmarks. Roman bond may be accounted for to need held large amounts for magnesia.

In the West, Portland cement replaced magnesia for masonry uses in the 20th century when energy was cheap (see energy efficiency) and mold infection was poorly understood.

However, exactly tasks begun and Johnson had proceeded to utilize magnesia. New york City’s brooklyn span base will be settled on starting with mainly mined cement, An mixture from claiming calcium oxide What's more magnesia bond ordinarily called Rosendale characteristic Cement, the main regular non-fired bond settled on in the us.

Magnesia bond sheets were sanction for development use in around 2003.

Due to its fire resistance and safety ratings, New York and New Jersey were early adopters of magnesia cement board. Florida has adopted magnesia boards for mold/mildew resistance. It is hurricane and impact tested and approved in Miami-Dade County.

Magnesia is widely used primarily as wallboard alternative to conventional gypsum-based drywall and ply-woods. The magnesia boards can be scored and snapped, sawed, drilled, and fastened to wood or steel framing. It is recommended for interior applications only.

The International Building Code (IBC), Section 2509 states that MgO boards must not be used when exposed to weather (i.e. moisture must not reach the MgO boards – paints/renders are breathable and as a result cannot prevent moisture from reaching the MgO boards.

Magnesia boards are a good example of the advances made in construction materials to meet changes in building codes for safety and durability.

What is more, it is very energy efficient – It is removed from ore at about 25% of the temperature (400-800 °F) required to form CaO, the starting material for the preparation of slaked lime or portlandite used in common mortar and plaster.

Magnesia boards have been mentioned in articles about biologically friendly construction and risks of mold infection.

Fire-resistant (UL 055 and ASTM-tested and A-rated)

Natural deposits of magnesium oxide occur primarily in China. Local governments there prohibit the exportation of the raw materials for manufacturing outside China.

Little mining of magnesium based minerals occur in the United States or Europe and is not thought profitable. Meaning, in effect, that building projects will rely on Chinese materials.

In most cases good quality magnesia board is more expensive than paper faced gypsum drywall material. However comparable to cement board made from Portland cement, for wet applications, and with numerous advantages over that material.

Like all cement mixtures magnesia cements and related mixing recipes and equipment require strict controls in both the raw material going into the mixer as well as the curing process and proper waiting time for setting and handling of the fresh and semi-fresh product. Many cheaper brands cut corners making inconsistent material - essentially magnesia is not quite a commodity.

Several different producers exist with big differences in their production and selling costs which greatly impacts on the mix design and curing process which makes each brand very different in potential uses. Even though the different brands may look and feel similar caution must be used when selecting the versions and brands for specific use since they are not all the same or usable in the same way.

Boards tend to have quite unique installation requirements. Each version of magnesia board needs to be installed using the manufacturer's recommendations to avoid installation problems.

Most often the boards are produced by using Sorel cement (Magensiumoxychloride). Resulting in a very hygroscopic product that can produce a problem named "crying boards" when applied in too humid climate.

The chloride also produce a highly corrosive environment for fasteners and steel studs.