Chairman of Wanda Group and China’s richest man, Wang Jianlin, has set his sights on Disney and aims to claim dominance in China. The mission is in response to the recently developed ‘Disneyland Shanghai’, which has seen customers travel from far and wide to experience the ‘magic’ that is associated with the Disney brand. Although, Wang doesn’t believe he can create just one Theme Park that would rival the numbers of Disney, instead, Wang intends on using ‘strength in numbers’ by building 15 multi-billion-dollar Theme parks by 2020. He has been quoted as saying he will ‘build a pack of wolves’ to defeat ‘one tiger’.
Just in time for China’s golden week national holiday, Wanda Group officially opened their 160-hectare ‘Hefei Wanda City’ theme park, in the eastern province of Anhui. The complex is the next in line of successive theme parks to be opened by the Wanda Group; the previous was opened four months ago in Nancheng. Whether strategically located in these particular areas to counter Disney is unrevealed but both theme parks are within a 4-hour train ride of Shanghai.
The Hefei Park, comprising an outdoor entertainment facility, a shopping mall, a movie complex and an indoor water park, is Wanda’s latest attempt to diversify from its real-estate roots and build a culture-and-entertainment empire that it hopes will overshadow Walt Disney. However, the park is still not the finished article, and the weekend just gone saw Wang announce that he will be investing $1.5 billion. China can expect to see a further 8 ‘Wanda Cities’ built by 2020, with the remaining being constructed overseas, where it tries to take on Disney on all fronts.


The cost of the complex has been disclosed as 24 billion Yuan. Wang says he hopes the world-class theme park will enable Hefei city to become a world-class tourist destination. 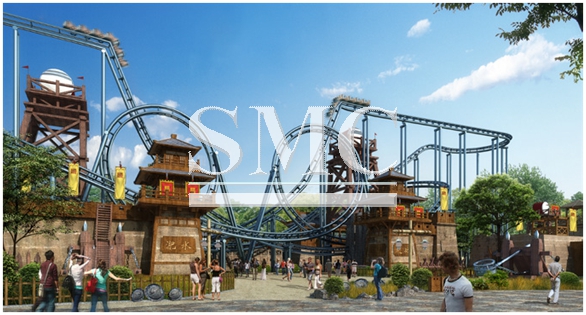