A robotics corporation based in Korea has created a 4m-tall iron-man like suit that is operated using master-slave controls from a cockpit within its torso. The suit weighs 1.5 tonnes and is made with the idea of helping clean-up Japan’s Fukushima disaster site, obviously though, the suit can be used for a realm of different possibilities.
The suit was designed by Vitaly Bulgarov, who is renowned for imagining futuristic robots, which have been portrayed in films such as Terminator, Robocop and Transformers. His robot creations have now been made into a reality by Korean Future Technology.
It is capable of amplifying the movements of its operator, with articulated arms and legs that allow it to manipulate objects and walk on a flat surface.
The main drawback of the machine is that it has to be plugged into a mains in order to operate. In factory applications, this can be done by attaching the suit to an overhead power source. Bulgarov wrote on Facebook yesterday: “The Company’s short term goals include developing robotic platforms for industrial areas where having a tethered robot is not an issue.
“Another short-term real world application includes mounting only the top part of the robot on a larger wheeled platform solving the problem of locomotion through an uneven terrain as well as providing enough room for sufficient power source.
“A modified version of that is already in development and is planned to help in restoration of Fukushima disaster area.”


The future is closer than we thought. 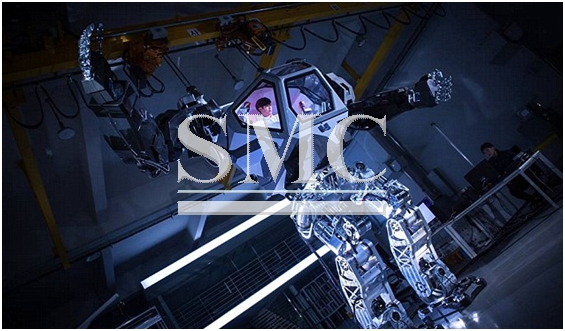