Tesla and Panasonic have enhanced their already flourishing partnership. The latter is set to invest $256 million into a New York facility which is operated by tech-billionaire Elon Musk’s Tesla. Two months ago, the two companies signed a non-binding letter of intent, which saw the the two companies agree to make cells for Tesla’s stationary power storage units, the Powerwall and Powerpack.
The plant is going to be located in Buffalo, New York. It was initially built by Silevo, a company which was later acquired by SolarCity in 2014. However, in November 2016, SolarCity was on the receiving end of a $2.6 billion acquirement from the clean energy juggernaut that is Tesla, a move that was overwhelmingly approved by Tesla’s shareholders.
The plant is expected to open for production in the summer of 2017. The two powerhouse companies are aiming to manufacture the energy-converting cells and modules which are due to be used in Tesla’s solar glass tile roofs, which were also unveiled earlier this year. Elon Musk has a grand vision in which the company will create fashionable and aesthetically appealing roof tiles that will collect energy from the sun and charge both batteries for the homes, and electric cars in the garage.
Under the agreement, Panasonic will cover capital costs at the Buffalo plant, while Tesla is making a long-term purchase commitment from Panasonic, the companies said. Panasonic will also join Tesla in solar development at SolarCity's facility in Fremont, Calif.


Tesla Motors and Panasonic already plan to collaborate on batteries at the $5 billion Gigabattery plant that Tesla is building near Reno, Nev. 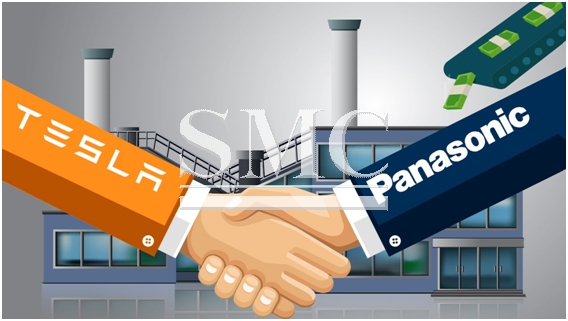