Air pollution is a major problem plaguing the 21st century. Our cars, homes, and industries emit damaging carbon dioxide that is wreaking havoc on our environment. Poor air quality, smog, and global warming are just a few negative side effects of our carbon dioxide emissions. As the problem worsens, the more ideas to curb our pollution output arise. One architect is attempting to achieve this through an energy-saving, carbon-absorbing civilization.

Vincent Callebaut is the Paris based architect behind this innovative green building. His idea is breaking ground in Taiwan’s capital city of Taipei. The building is named ‘Tao Zhu Yin Yuan’, which means ‘The Retreat of Tao Zhu’. This residential complex at completion in September of 2017, it will be covered in 23,000 trees and shrubs. With so much greenery and shrubbery on the building it will resemble an urban forest; however, that is not the inspiration for the project. Callebaut designed the complex to resemble a strand of DNA. It has a double helix like appearance twisting ninety degrees from the base to top. 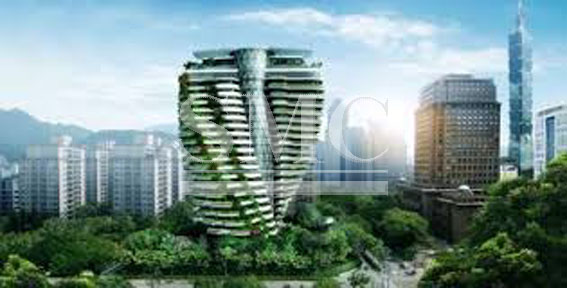 Callebaut’s energy sustaining apartment complex is skillfully designed to help residents to reduce their energy consumption. The design optimizes natural lighting and ventilation. It also is equipped with a rain water recycling unit and rooftop solar panels. If all goes in accordance with Collebaut’s design the plants on the building have the potential to absorb roughly 130 tons of carbon dioxide emissions each year. This is the equivalent to erasing the CO2 emissions of about twenty-seven cars. However, Taipei alone produces around 250 million tons of CO2 a year, Callebaut admits this is a small step, but insists it’s “a big leap against global warming.”

This is not Callebaut’s first time designing environmentally friendly structures. This self-described “archiobiotect” has been behind several other innovative green building concepts over the years. One of the recent projects he has created is a floating garden designed to clean European rivers.  He also has a one hundred and thirty-two story urban farm planned to be built in New York City in the next few years. His most ambitious project yet is said to transform the City of Paris into a green city by the year 2050. Callebaut says, “The core of all of my designs is an attempt to address the real threat that cities pose for humankind and our ecological balance.” Callebaut’s designs are the first of their kind, and will hopefully pave the way for a greener and more environmentally friendly society.