The immense facility stretches in the suburbs of the city of Qingdao. It has the capacity to turn out three brand new high-speed trains every four days; the 1.8 million square meter plant complex contains 32 fully-operational workshops. Almost half of the high-speed trains in China were designed and manufactured here.

Every minute, 70 centimeters of welding is processed. The 200 workshops produce more than 40,000 components, and 72 special aluminum alloy plates are seamlessly welded together. The regular high-speed train has eight carriages, requiring a total of 18.4 kilometers of welding; most of the processes are automated. In processing the hollow axles, the permitted margin of error is less than one tenth of a millimeter. 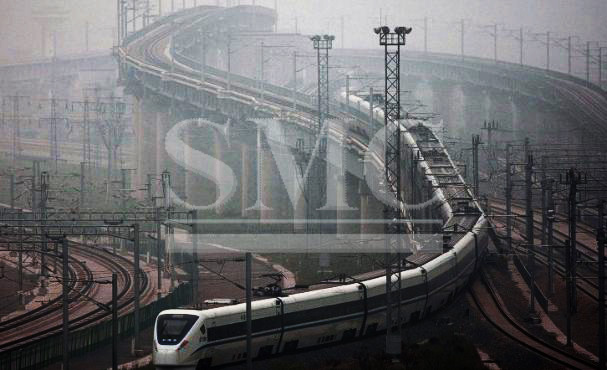 Ding Sansan is the high-speed train’s designer and the deputy chief engineer of CRRC Qingdao Sifang Co. A main focus of his work is aerodynamics. He said that in the train’s design they have to take the aerodynamics into account. When a train travels at 300 to 350 kilometers per hour, 80-90 percent of the resistance is from the wind.

380 kilometers an hour is roughly the speed of an airplane cruising at low speed. However, high-speed trains have to resist against near-ground air streams, the shock generated by other, passing trains and the drastic airflow change in tunnels. In short, these trains are operating under more complex conditions.

In one year alone, the plant produced more than 200 high-speed trains. The total length of Chinese rail is expanding by 2,000 kilometers every year. By 2025, it will be an unprecedented 38,000 kilometers long.