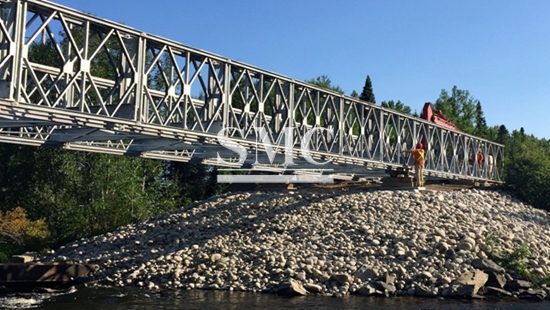 Compact panel bridges are known for their easy trasportation and assembly. They are composed of a light weight main beam. This main beam is connected to the panels by connection pins. These are then assured by the 3m panel. Compact panel bridges can be launched in a couple of methods. They can be slid or rolled from the abutment or lifted piece by piece by craines or stand jacks. Sometime they do require a combination of erection methods. This is called a hybrid scheme. Most times their components and beams are small and light weight enough to be transported in the back of truck beds. They can be assembled quickly and can even be done overnight to minimize distruption.

The history of the compact panel bridge dates back to World War II. Donald Bailey, is accredited with the invention, hence the name “Bailey Bridge”. Bailey was a civil servent in the British war office who tinkered with bridges as a hobby.  He presented his idea to the British Royal Army and they began making a prototype at the Military Engineering Experimental Establishment in 1941. However, the completed concept was not completed until 1942. By D-Day in 1944 several compact panel bridges were available and ready to use on that monumental day in history.