Bill Gates, the founder of Microsoft literally threw millions of dollars into toilet as he together with his wife invested $42 million in a competition of designing toilet systems for developing countries. In the competition Duke's Pratt School of Engineering presented a creative solution that uses shipping containers to sanitize human waste. 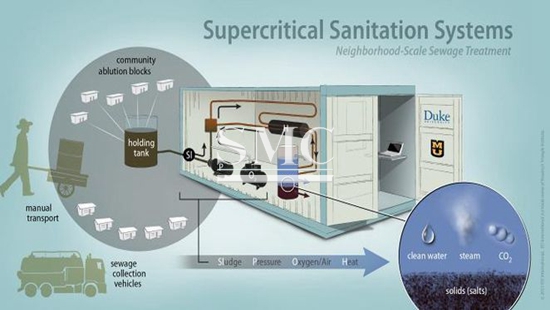 The university was offered a $1.18 million grant of its idea of turning human waste into energy.  The sanitation solution that starts with the individual and the toilet, includes the storage, transportation and treatment of human waste, and ends, ideally, with safe, usable by products such as fertilizer, fuel or clean water.

As the diagram above shows, human waste goes to an underground shipping container. This 20-foot shipping container uses enough heat and pressure to drive the internal water into so called 'supercritical phase'. Supercritical water can oxidize the waste and produce a sterile combination of water, carbon dioxide and salts. It also produces a lot of heat that can be directed back to the system or, say, to a power generator.

The World Health Organization has stated that there 2.4 billion people that do not have access to any type of improved sanitation facility. In addition, about two million people die every year of diarrheal diseases; most of them being children under five years of age. Just like container hospitals and Coca-Cola's container kiosks, the new container toilet system is a new example of how shipping containers can save lives!